Nestor Topchy, A Geometry of Painting

While in school in Baltimore in 1981, Topchy chanced upon an exhibition of Yves Klein’s IKB work. Topchy credits Klein’s use of a saturated ultramarine blue pigment that represented “the void” as a pivotal discovery. After using this color on spherical sculptures, Topchy realized their connection to Pysanky, the ornately decorated Ukrainian Easter eggs he made in childhood with his mother and grandmother. 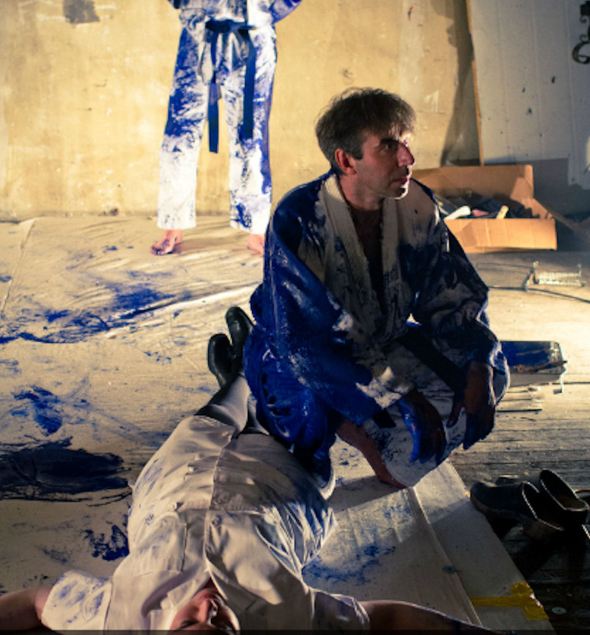 Following in Klein’s footsteps, Topchy earned a black belt in judo under Karl Geiss, which led to studies in Buddhism and a deeper understanding of his Ukrainian roots and identity as a dual American and Canadian citizen. 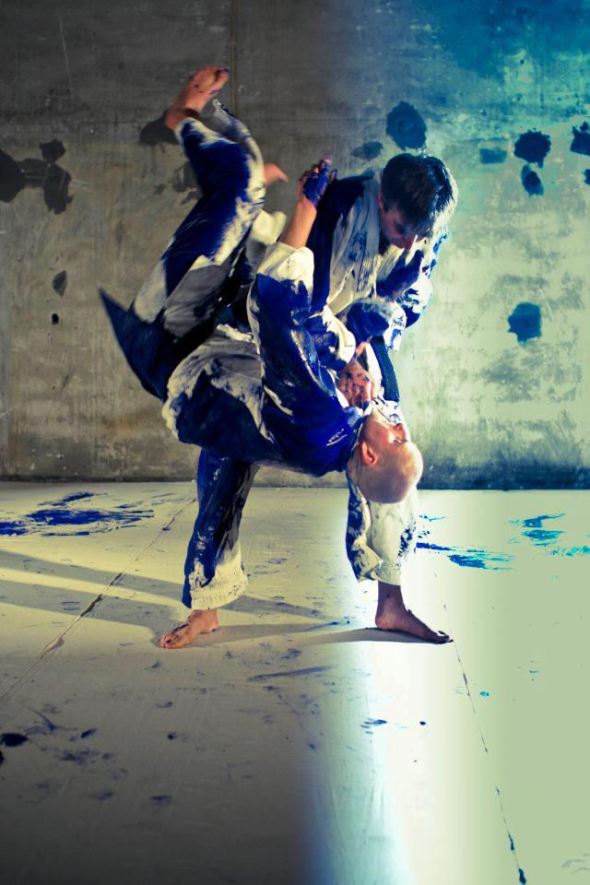 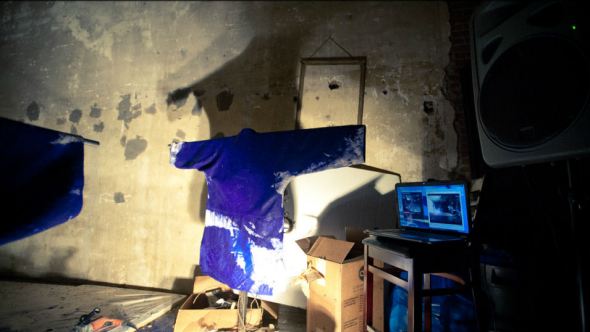 The Great God Pan Is Dead: What I did at the Lone Star Explosion Biennale: Day 3 (NSFW) 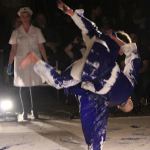 Click on the links to go to Day 3 by Dean Liscum
Lone Star Performance Explosion day three’s dominating theme seemed to be food and catharsis. By the third day, I figured out the timing (the artists never start on time) and arrived in time to catch all the acts even though the first thing listed on the bill was Daniel-Kayne‘s Three Day Fast. By my calculations he was a day and a half into it, which made me a day and a half late.

The Great God Pan Is Dead: What I did at the Lone Star Explosion Biennale: Day 3 (NSFW).

The aim of this symposium is to open a dialogue in relation to the power of the human body in space. Certain questions will be raised about how performance can influence the mind in a potent manner and help cultivate awareness and bring about a change of consciousness.

Each artist, will use video clips and images to explain their work and why they have chosen performance over other more conservative forms of creative expression. At the end of the symposium audience members will get the opportunity to participate in a question and answer session. 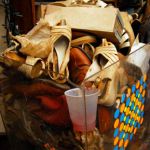 The rain has let up for a moment and four different bird varieties express their jubilation in song. Woven in with these sweet warbles are the sounds of wood hitting metal.

It’s Saturday, and it’s been pissing rain for two full days now. There is a veritable river, four inches deep, flowing from Nestor Topchy’s back yard into the storm swale out front. That’s four inches of water–not counting the mud. 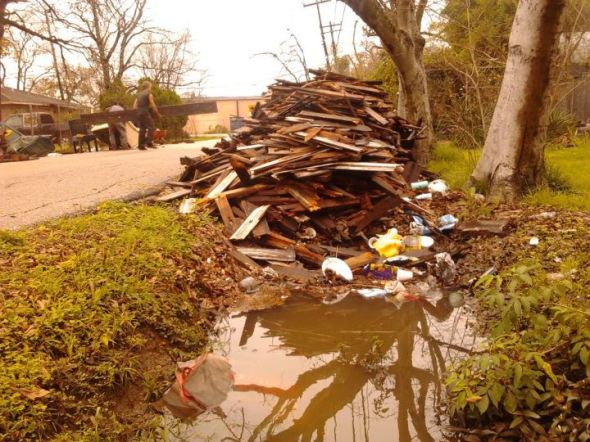 The chest high pile of scrap wood which formerly made up the shelving in a downtown Houston department store--now a de facto beaver dam.

Cars slow down to weave through the narrow passage between the two heaping piles of debris on either side of this quiet, residential street. It’s like a game of Frogger. Five men shuttle back and forth carrying long boards with nails poking out, overstuffed arm chairs, ratty waterlogged couch cushions, vintage suitcases, and all manner of jetsam that was evacuated from notsuoH one week ago–carrying it from the piles on the side of the road to the back of the dumpster on Nestor’s lawn.

Starting at the driveway, pieces of plywood, old doors, cinderblocks, bricks, and paving stones create a somewhat stable path across the flowing wate

We are gearing up for the first ever Lone Star Performance Explosion–aka the Houston International Performance Art Biennale 2012.

Last Sunday, Nestor and his army of volunteers cleared out the second floor of Houston’s storied notsuoH. It had to be done on a Sunday–notsuoH is on Main Street, downtown, and the City would not allow them to install a chute and dumpster. The problem is, all the dumps in the area are closed on Sundays.

Vintage suitcase in a wheel barrow.

So they carried all the junk and old shelving–three double-axel trailers’, three dually trucks’, and three standard pickups’ worth–down the stairs and dumped it here, like they’ve always done, expecting the City to pick it up during standard trash pick-up, like the City’s always done. Except the City is operating under an austerity budget and they’re not having it. They told Nestor he had two choices–clean it up, or pay a fine and clean it up.

So here we are. The chest high pile of scrap wood which once made up the shelving in what used to be a department store in downtown Houston is now a de facto beaver dam.

When I see sofa cushions I can't help but think of all the people who have farted and wiped boogers on them.

Starting at the driveway, pieces of plywood, old doors, cinderblocks, bricks, and paving stones create a somewhat stable path across the flowing water. The stones shift under my weight. This is the inverse of Hercules cleaning the Augean stables–these laborers are going against the flow of water to move a haphazard pile on the side of the road to a haphazard pile in a blue construction dumpster. And who is the genius who placed the dumpster so that its doors are on the far side?

Jim Pirtle is nowhere to be found. 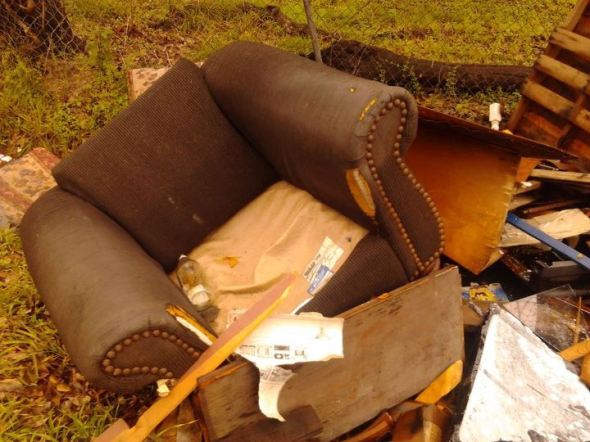 Tap the bottle and twist the cap. 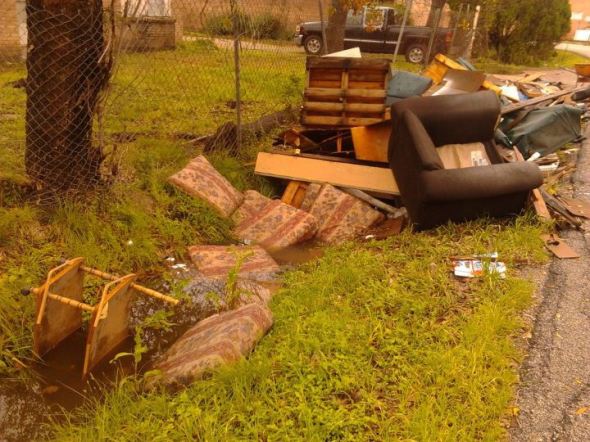 One of the Houston art world’s great visionaries, Nestor Topchy is a painter, sculptor, installation artist, and performance artist who was born in Somerville, New Jersey in 1963. Since 2001, he has lived on the North side of Houston on an acre compound with his wife and daughter.His work interweaves paradoxical strands of thought, incongruous painting techniques, disparate artistic traditions, and antithetical pictorial attitudes to express a coherent and pantheistic vision of reality.

HIVE Houston
In the early 1990s, Topchy noticed rows of shipping containers stacked ten high in the Houston Ship Channel. Struck by their resemblance to interlocking Lego blocks, he imagined the containers as the building blocks of a utilitarian structure that could serve a community’s needs in a beautiful way.
In 2004, as part of the Project Row House Festival (with the support of its then Interim Director Michael Peranteau and in collaboration with architect Cameron Armstrong and artist Jack Massing), Topchy installed a single donated container simply known as Seed. Within Seed Topchy constructed mock-ups of shipping containers converted to habitable boxes re-purposed as a school, hospital, jail, shop, mall and residential living facilities. Seed became the prototype for Organ, a proposed living work of art and architecture and sustainable village to be constructed from 486 steel shipping containers. Organ was featured in the 2009 “No Zoning” exhibition at the Contemporary Arts Museum Houston curated by Toby Kamps and Meredith Goldsmith, and with further assistance from consultant Mariana Lemesoff, architect Si Dang, engineer Hisham El-Chaar, Executive Director Heidi Vaughn. Now known as HIVE, the project has become an emergent real.

TemplO/Zocalo
From 1989 to 2001, Topchy was Co-Founder and Artistic Director of [TemplO/Zocalo], a nonprofit artist-run performance compound. TemplO/Zocalo was an incubator for experimental artistic activity, and gave artists of all disciplines a forum for creating, exhibiting and staging experimental and edgy works. The complex housed artists’ studios and living spaces, a gallery, indoor and outdoor stages, and embodied the belief that art is a creative and spiritual way of doing anything.
Many TemplO/Zocalo collaborators achieved regional and national prominence, including Andrea Grover of Aurora Picture Show, The Art Guys, Jason Nodler and Tamarie Cooper of Catastrophic Theater, Kevin Cunningham of Three Legged Dog in New York, dancer Richie Hubscher and lighting designer Christina Giannelli of the Houston Ballet, Richard Olsen of Nexus New York, Mariana Lemesoff of Helios Arts/AvantGarden, New York painter Giles Lyon, the late video pioneer Andy Mann, and conductor Jon Axelrod of Lucerne, Switzerland. Alison de Lima Greene, curator of the Museum of Fine Arts Houston, which owns a bit of Topchy’s earlier work, described TemplO as Gesampkunstwerk, a total work of art.